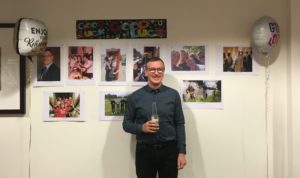 Tom joined the business back in 1974 and is the last remaining link to our company’s namesake, having worked with David Doig himself.

With over four decades under his belt, Tom has accomplished a lot in his time here. Tom’s project highlights include:

Furthermore, Tom was responsible for the Project Management service within Doig+Smith, a division he led from 1993 to 2015.

He also played an important part in setting up our London Office and has worked hard to develop our client base South of the border.

We would like to thank Tom for his hard work and wish him all the best in his retirement. He will certainly be missed by colleagues, partners and clients alike!

Director Gill Kirkness will take over Tom’s existing projects. To get in touch with Gill, drop us a message here.